Why and how legal changes affect iconic protected areas? 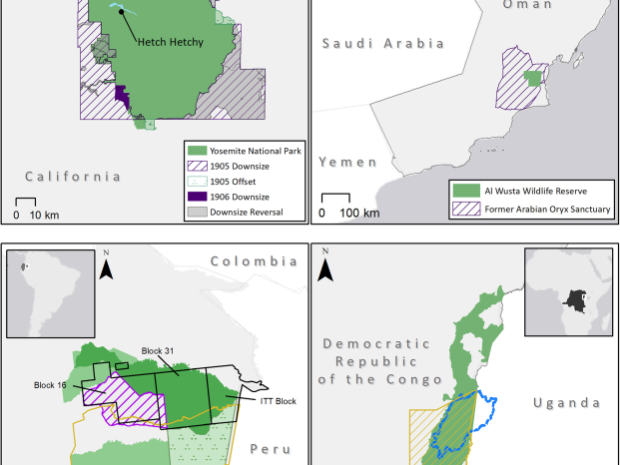 As the cornerstone of conservation, protected areas (PA) are often expected to provide permanent protection to nature, biodiversity, and ecosystem services. In reality, however, legal changes made to loosen the PA restrictions (downgrade), shrink the PA boundaries (downsize), and remove the protection status (degazette) are widespread and through the history of protected areas. These legal changes, collective called Protected Area Downgrading, Downsizing, and Degazettement (PADDD), may even threaten iconic protected areas recognized by UNESCO as World Heritage Sites and Biosphere Reserves.

Featured as cover story in the December 2019 issue of Conservation Biology, our paper found over 20 instances of PADDD enacted or proposed to UNESCO World Natural Heritage Sites. We further investigated the context of PADDD events in Yosemite National Park (USA), Arabian Oryx Sanctuary (Oman), Yasuní National Park (Ecuador), and Virunga National Park (DR Congo), where the legal changes of rules and boundaries were proposed/enacted from early 20th century to 2018, with different causes and impacts. In Yosemite National Park, downsizings and downgradings were made in its early history for forestry, infrastructure, and hydropower; some downsized lands were later re-protected and hence less fragmented comparing to those not. The Arabian Oryx Sanctuary, after the short success of species re-introduction, was downsized due to a mix of conservation failure and interest to hydrocarbon exploitation. The boundary and regulation changes in Yasuní National Park are related to indigenous rights and oil and gas, embedded in the context of (international and domestic) interest in climate and biodiversity vs. those in development and energy. In Virunga National Park, the first decision to downgrade the park for oil exploration was reversed after contested by the civil society; yet the subsequent change of hydrocarbon law opened up the possibility to downsize the park and other protected areas, leaving the future of the land uncertain.

Figures: Maps of the protected areas and the areas experiencing boundary/regulation changes documented in the study. More details at https://conbio.onlinelibrary.wiley.com/doi/10.1111/cobi.13365

The case studies presented rich details and histories before and after PADDD decisions, as an early step to understand and address the conservation challenges. While there are more to explore regarding the full scope of PADDD and the context behind certain stories, most PADDD decisions were not about improving conservation planning or resolving historical injustice. Globally, more than half of PADDD decisions are associated with industrial-scale extraction and development. However, questions remain on the drivers (and actors) behind PADDD, the mechanism to PADDD, and the enabling conditions of when local or distal pressures would translate to legal decisions. With more comprehensive data on the scope and decision-making context of PADDD, further research is possible to assess the ecological and social impact of PADDD concerning the context and causes.

Regardless of the context-specific causes and consequences of PADDD, some general improvement on the policy processes can help ensure the integrity and equity of the current PAs under pressure of PADDD: 1) proper record keeping and reporting on PADDD histories and proposals, 2) transparent policy process with adequate public consultation compatible to the PA establishing process, and 3) coordination between institutions and legal frameworks at different scales (e.g., local, regional, national, international) or with different emphases (e.g., environment, energy, agriculture). Finally, mitigation options should be explored and fully considered if PADDD is not avoidable.

A side note on conservation telecouplings

As we see in the cases, protected areas supported by domestic and international funding and interest may both subject to downgrading, downsizing, and degazettement. The drivers of PADDD, on the other hand, can come from both local or domestic stakeholders, but often also from distal actors (e.g. international oil and gas companies, or export-oriented industrial-scale agriculture). New studies have emerged to see the establishment, implementation, and management of conservation areas as telecoupling process, and we can expand to look at the exit of conservation strategies – i.e. whether it is a de-telecoupling or simply a replacement of one telecoupling process by another – to better explain the effect on biodiversity and focal environmental justice.

The research is carried out at Conservation International. COUPLED supported SQ’s time revising the manuscript. To access the original essay on Conservation Biology: