How much environmental problems are due to the mix of sectors, the mix of origin of imports or the mix of consumed products? 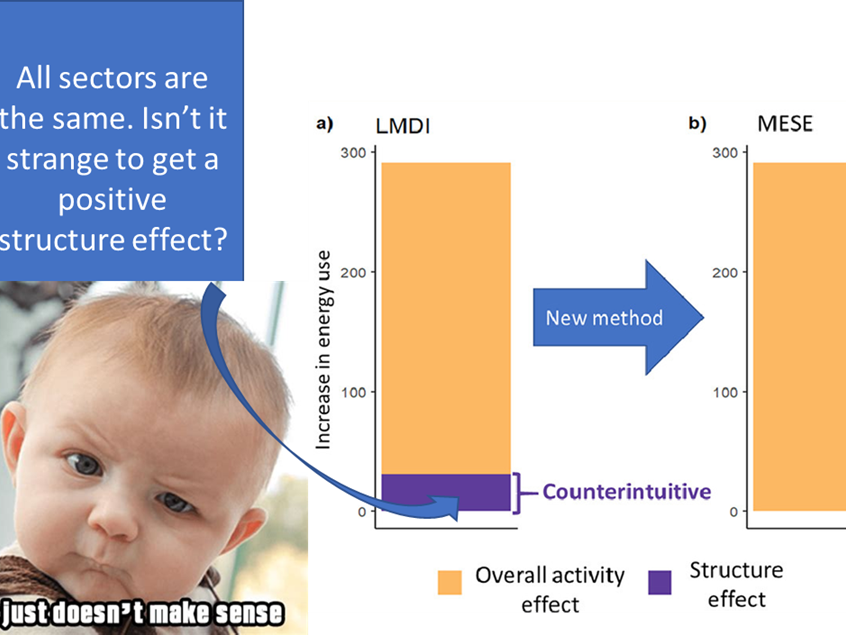 Why would it make a difference whether Brazilian soybeans are exported to France or to China?

Almost two years ago, I was working on a paper analyzing how changes in the mix of origins of agricultural imports affected ecosystems on land (Roux et al., 2021). I had noticed that agricultural products were increasingly not only produced domestically, but also imported from abroad. Furthermore, the origin of imports had also been changing over time. For example, soybeans consumed in Europe or China used to come mainly from the USA in the 1980s, while imports from South America later took the overhand. I hence wanted to quantify the effect on ecosystems of these changes in the origin of agricultural products. I started by using the most commonly used method to decompose the drivers of environmental impacts, a method called the logarithmic mean divisia index (LMDI) (Ang, 2004, 2005). This method is widely used in academia, but also in policy making (Plank and Eisenmenger, 2018).

However, as I was experimenting with this method, I started noticing something strange about the LMDI: it showed that not only the mix of origins, but also the mix of destinations had an impact on ecosystems. My professor and I tried turning these results in all directions, imagining the weirdest possible interpretations. But none of them really made sense: why would it make a difference whether Brazilian soybeans are exported to France or to China? As long as Brazil still produces the same amount of soybeans, it should not matter for ecosystems where these soybeans are exported to.

Something must be wrong about the method

I came to the conclusion that something must be wrong about the method. I dived deeper into the nooks and corners of the LMDI. I first tried playing around with toy models to apply the LMDI on simple self-created experimental examples, comparing the results with what I was expecting using semantical reasoning. For example, I tested the LMDI on a hypothetical example in which all countries are exactly the same. I expected that the mix effect should be zero, because when all countries are exactly the same, it makes absolutely no difference where products come from, or where they are consumed. But again, the LMDI yielded a positive mix of origin effect.

I then found out why the LMDI was yielding these strange results: the LMDI defines mix effects, as the mix of origin countries using the shares of each country in total consumption. Therefore, if the shares of the origin countries change, for example when the share of Brazil in France’s import of soybeans rise from 20 to 50%, while the share of the USA in France’s imports decreases from 70 to 50% (hypothetical numbers), then the LMDI automatically finds a non-zero mix of origin effect, even if Brazil and the USA were producing soybeans exactly in the same manner, using the same area, and having the same pristine ecosystems, just because the shares have changed.

An alternative method: The Marshall-Edgeworth with Structure Effects (MESE)

I therefore developed an alternative method. I called this method the Marshall-Edgeworth with Structure Effects (MESE), because it was close to another already existing method called the Marshall-Edgeworth index (structure effect is another commonly used name for mix effect). Unlike the LMDI, this method does not define structure effects using shares. In the MESE, the mix of origin effect is high when, for example, France increasingly imports from countries where the ecological impact per tonne of soybeans production is higher than in other countries. We thought that this definition was more intuitive than the definition of the LMDI, and that it was closer to how researchers usually interpret structure effects. Fortunately, the results of the MESE always coincided with expected results in the experimental examples.

I additionally spent a bit of time to formally prove that the strange results of the LMDI were indeed due to the use of shares, using mathematical formulas, but also discovered limitations of the MESE, and explained my findings in an article published in MethodsX. Because the LMDI was originally developed to analyze the drivers of energy use, I abandoned my usual field of land use and trade, and illustrated the method with the example of changes in the mix of economic sectors on energy use, to address the community which most deals with these methods. With the help of my colleague Barbara Plank, we compared the MESE and the LMDI in an empirical example, quantifying the effect of changes in economic sectors on energy use in the USA.

Plank, B. and Eisenmenger, N. (2018) ‘Decomposition analysis – scientific review and evaluation of the Eurostat approach’.