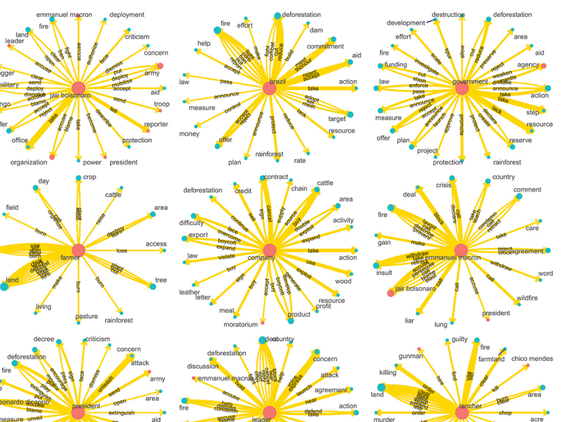 Brazil plays a central role in Western depictions of and narratives on tropical deforestation. In this contribution, we gather a large text corpus from Western media outlets with articles on deforestation in the Brazilian Amazon and Cerrado biomes. The sources include outlets from Europe, the US, Canada and Australia and span a time period from the late 1980s to 2020. Leveraging several text-mining approaches, such as topic modeling and automated narrative network analysis, we disentangle the way that Western media have tried to make sense of deforestation in the Amazon and the Cerrado biomes. We show that the former has received disproportionately more news coverage, specifically in times of international concern over the Brazilian government’s commitment to tackle deforestation. Further, Western media frequently report on the struggles of indigenous populations in the Amazon, often following an essentialist depiction of these communities, while in the case of the Cerrado, traditional populations are hardly mentioned at all. Our findings provide a methodologically innovative and empirically grounded case for the often raised concern over a relative invisibility of the Cerrado biome and its traditional populations, which may help explain observed disparities in governance interventions.

Research project: Justices and Injustices in the Soy Value Chain