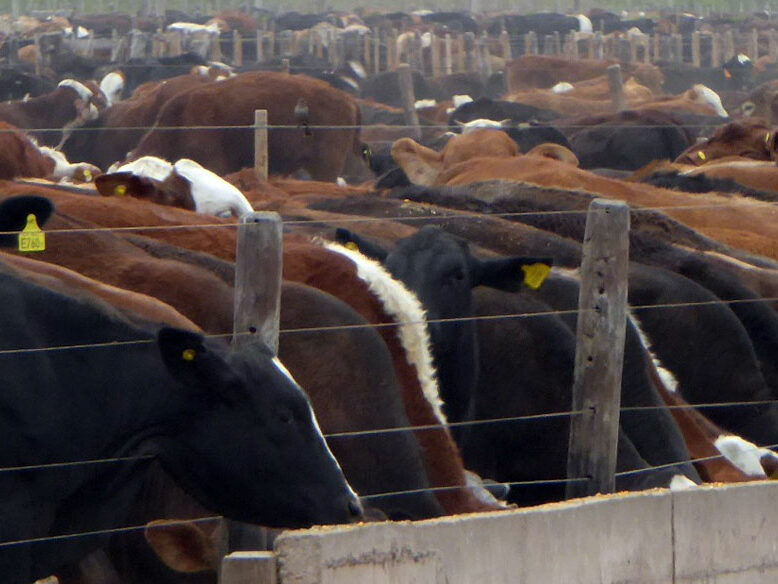 Livestock provides important services to humans such as transforming grass into food, recycling kitchen waste or providing organic fertilizers. In addition, livestock provides a labor force in non-mechanized agricultural systems, is often linked to ancient cultural heritage, and supports the livelihood of more than a billion producers and retailers.

However, livestock production considerably contributes to the climate and ecological crises. Livestock is responsible for around 14.5% of global GHG emissions, uses 70% of all agricultural land, and 58% of total harvested biomass. Such burden is particularly due to the industrialization of livestock systems that resulted in high livestock densities in certain areas and a decoupling of feed and animal production, which jeopardized global nitrogen and phosphorus cycles, hence eutrophicating surface waters. Livestock is also a resource-inefficient way of feeding humanity due to the energy losses between trophic levels. For example, ~250 kilograms of feed biomass are required to produce one kilogram of protein from cattle meat.

Nevertheless, the global livestock system has grown rapidly since the mid-20th century, exceeding sustainable levels and health recommendations in various regions of the world. Very often, this excessive consumption of animal products has been described as a consequence of consumer-driven dietary change, induced by raising income and urbanization. Yet, I believe this explanation is an oversimplification of the processes driving the growth and intensification of livestock systems.

Over the last decades, several policies have aimed to increase the production and industrialization of livestock. One just needs to read the first sentence of the EU Common Agricultural Policy to understand that such policies must have been an important driver of livestock production: “The objective of the common agricultural policy shall be to increase agricultural productivity”, which includes livestock production as made clear later in the treaty (Treaty on the functioning of the European Union, article 39). In the year 2012, OECD countries paid a total of $52 billion as subsidies to support the production of fodder and animal products. In the 1980s, structural adjustment policies, deregulation, and the large-scale adoption of biotechnology through large agribusinesses boosted the production and exports of soybeans in South America. Trade liberalization has also been described as an important driver of dietary changes, by increasing the availability and affordability of feed and animal products. For example, the GATT agreement on agriculture in 1995 and China’s accession to the World Trade Organization in 2001 prompted access to cheap feed from South America, which, stimulated the further increase of Chinese and global meat production. Finally, marketing campaigns from the livestock industry and governments contributed to making this increased production attractive to consumers. For example, a study led by Greenpeace found that between 2016 and 2020, the EU spent €252.4 million to promote the sales of European meat and dairy products. The growth of the livestock system and associated environmental pressures hence cannot be merely attributed to dietary choices by final consumers, but rather to the dominant paradigm since the 1940s, to grow and commodify agricultural production, liberalize agricultural trade, and prompt the sales of animal products, which manifested intogeopolitical and economic strategies pursued at all stages of livestock supply chains.

Figure 1: the growth of the livestock system and associated environmental pressures cannot be merely attributed to dietary choices by final consumers, but rather to the dominant paradigm since the 1940s, to grow and commodify agricultural production, liberalize agricultural trade, and prompt the sales of animal products, that manifested into geopolitical and economic strategies pursued at all stages of livestock supply chains.

From consumer-driven to supply-chain oriented narratives on dietary change

We understand the evolution from place-based and consumption-based accounting to the trilateral trade approach as a timid but important step to empirically illustrate a change towards a supply-chain narrative on dietary change. This narrative suggests that the pressure on ecosystems linked to livestock supply chains has not only been driven by feed producers or final consumers, but by decisions at all stages of the supply chain. Future research could link the evolution of our trilateral eHANPP data to political and economic decisions at the different stages of the supply chain.

Livestock supply chains can hence be governed either at the feed producer, animal product producer, or final consumer level. Although agroecological practices and technologies might reduce the ecological impacts of livestock to some extent, their potential is limited. Animal products, even produced with the best existing practices, still generate higher ecological impacts than plant-based food, for the same nutritional values. Compliance with ambitious climate and biodiversity targets hence requires the reduction of livestock in over-producing and over-consuming countries (Figure 5). Technologies and farming practices are not only insufficient to achieve ecological targets, but their potential is also far below the ecological benefits of reducing livestock.

Figure 5: a) Consumption of animal products and b) eHANPP per capita in 2013. The blue line (21 kg dm/cap/yr) corresponds to the Lancet recommendation for a “healthy diet” (Willett et al., 2019).

The reduction of livestock is often reduced to the role of consumers, through voluntary or incentivized dietary change. Although we acknowledge the importance of consumers’ dietary practices, we see two major limitations of the consumer-driven narrative. First, it is questionable whether voluntary or nudged consumer-led changes can act fast enough to counteract the climatic and biodiversity crises in the absence of a deeper restructuring of livestock supply chains. Past changes in dietary habits as in post-war Europe and America were indeed never spontaneous, but rather fostered by a set of governmental, institutional, and economic incentives, especially agricultural intensification policies, research programs, the voluntarist actions of corporatist farmer unions and tariff removals, aiming to increase the production and sales of animal products. As past shifts in dietary habits were not spontaneous, one may doubt that future shifts will be. Second, scientists, NGOs, and politicians often favor the consumer-driven narrative, because it does not target any economic actor in particular or their own responsibility to drive the change. However, the consumer-driven narrative implicitly assumes that changes in consumer demand shall trickle down to the producer, reducing the production of animal products through tougher competition, and therefore inducing the eviction of less competitive, likely small-scale or less industrialized farmers.

The trilateral supply chain approach is an empirical application of an alternative narrative, beyond the dichotomy between farmers determining solely efficiency and consumers choosing the quantity of animal products, towards understanding diets as the consequence of decisions at all stages of the supply chain. It reflects the idea that any level of a supply chain is systemically linked to all other levels, domestically and through international trade. For example, the final consumption of animal products can be reduced by cutting both the production and imports of animal products.

The idea of influencing diets through interventions all along the supply chains of products is also reflected by strategy number two from Willett et al. (2019), suggesting not only better but also less animal production, through “incentives for primary producers to produce nutritious and plant-focused foods”. The idea has as well timidly shown up in campaigns from civil society organizations (https://www.eating-better.org/betterbyhalf#0-3), and in policy proposals. After Dutch activist movements sued their government for not achieving its climate goals, the Netherlands became to our knowledge the first country to introduce a policy proposal to reduce the ecological impacts of the livestock sector by cutting livestock production by 30%.

Instead of disguising the goal of reducing production behind a consumer narrative, the trilateral supply chain approach acknowledges the enormous challenge for livestock farmers and actors all along the supply chain. This recognition enables the stewardship of a rapid, but fair transition away from livestock production towards plant-based food, for example by accompanying farmers and stakeholders through partnerships and training programs. A just transition shall determine the extent to which production should decrease considering the context specificity of livestock producers and their environment, especially not to harm farmers with restricted livelihood alternatives. The reduction of the livestock sector shall also consider the differences in industrialization levels of global food systems, focusing on high and medium-income countries where the consumption and production of animal products is often too high, but avoiding nutritional shortage in developing countries. A just transition should as well consider mechanisms to ensure a fair distribution of animal products across consumers of different wealth within countries.

Finally, let’s not forget that feed and livestock supply chains are more complex than producers of feed and animal products and final consumers. In fact, global supply chains of feed and animal products are largely dominated by a handful of powerful intermediate actors. Studies showed that “Eight companies control at least 54% of the processing or exports of soybeans” (Folke et al., 2019), including Amaggi, Bunge, Cargill, ADM, and Louis Dreyfus, although ecological impacts of these companies are not always proportional to their market volume (www.trase.earth). Similarly, “74% of the deforestation risk linked to Brazilian beef exports were linked to the top 5 beef exporting companies” (Folke et al., 2019) topped by JBS, Marfrig Global Foods, Minerva, and Mataboi Alimentos (www.trase.earth). Retailers and supermarkets selling animal products, also tend to be concentrated in the hands of a few companies. This market concentration suggests that capping the quantity of animal products at intermediary stages of the supply chain might be more effective, than waiting for billions of consumers to voluntarily change their habits.

Quick language fixes you can immediately apply in academia

All figures in this blog are taken from the article.